Sand Springs was little more than a vision in town founder Charles Page’s mind when a small gathering of about 50 settlers and orphans met for the first worship service in August of 1908 by the sandy spring. Salvation Army Captain B.F. Breeding used an upturned barrel for a pulpit and his wife, Ethel, led the hymns accompanied by her guitar.

In October 1908, a Presbyterian missionary came to provide Sunday school literature to the small but growing group.

From these humble beginnings, the congregation was formally organized on January 18, 1910, as the “First Presbyterian Church of Sand Springs, Oklahoma”– although it was first known as the “Community Church” – to welcome the infant town’s new residents of all denominations and color. Rev. Dr. C.W. Kerr who was the pastor of a First Presbyterian Church in Tulsa and also a missionary preacher for the Indians helped to formally establish our church. 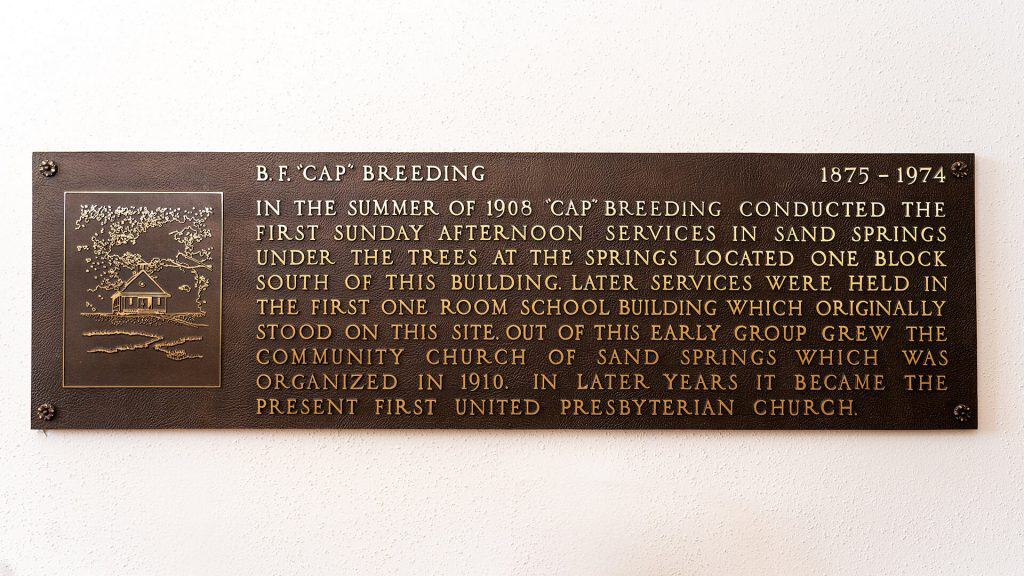 However, we have always been a community church dedicated to service and ministry outside of our church walls.

Originally, the church met in a one-room schoolhouse called Pleasant View School. Later, the church built its first structure at Fifth and Main before constructing its permanent building at Fourth and Main in 1917 with Dr. Seth Gordon as minister (1912-1921). Under the faithful leadership of Dr. Gordan and his teaching on tithing, the Church became financially self-sustaining and was able to build both churches listed above during his term as pastor. In 1913, Dr. Gordon also served as the acting President of the University of Tulsa.

In 1917, Alexander Kerr of Kerr Glass Manufacturing donated the land at Fourth and Main and he and Charles Page began a friendly competition donating funds for the church, including stained glass windows and a pipe organ.

From this location, the church continued its commitment to serving the community. Members organized Sand Springs’ first Boy Scout Troop No. 1, later renamed Troop No. 101. Members also helped establish the city library, Sand Springs Woman’s Club and the Sand Springs Welfare Association. The Rotary Club met weekly at the Church, with lunch provided by the church’s Ladies Aid Society which was initially served for 75 cents a plate.

The Ladies Aid Society was an important part of both the church and the community.

During the Great Depression, these women served the community by preparing and serving soup in the soup kitchen at Central School, “family dinners” once a week at the church, as well as serving community dinners.

One of the early memories of this church, told by Mrs. Harrison Young, is of Mrs. Charles Hubbard, who put together a large washtub full of potato salad, which along with pies and cakes baked in various homes, and vegetable and meats cooked at the church, were taken downtown to serve the public from an empty building for 50 cents a plate. This influential group of women also supported the church by raising hundreds, sometimes thousands, of dollars with various fundraisers including Mrs. Lucille Page’s Silver Teas and the sale of cookbooks. The women of the church were leaders, committed to serving as heads in local and foreign mission work as well as fundraising efforts seen above.

By the 1960s, the church had outgrown its downtown location and had raised enough money to begin construction of the present-day First Presbyterian Church located on Adams Road. Coming full circle, this site is the exact location of the original schoolhouse used for worship services in 1908.

The congregation dedicated the new building on August 21, 1966, bringing with them the memorial stained glass windows, organ and cornerstone filled with artifacts, documents, and mementoes from its history.

When we approached the centennial of the beginnings of our First Presbyterian Church in 2010, we were reminded not only of our heritage, but also of the people who sacrificed and built our church and community, who served each other through war and depression, celebration and progress, who before anything else, invited God to be part of the team and worshipped him for all he has done. As we strive to continue their tradition of service and community, we honor them and their commitment and may we, too, put God first in all we do and look for ways to serve God and our fellow man.

We invite you and your family to join with us as our extended family as we look toward the future, worshipping together, serving each other and following where the Spirit leads us into mission in our community and beyond.

[Jesus Christ] himself is before all things, and in him all things hold together. He is the head of the body, the church; he is the beginning, the firstborn from the dead, so that he might come to have first place in everything. ~ Colossians 1:17-18